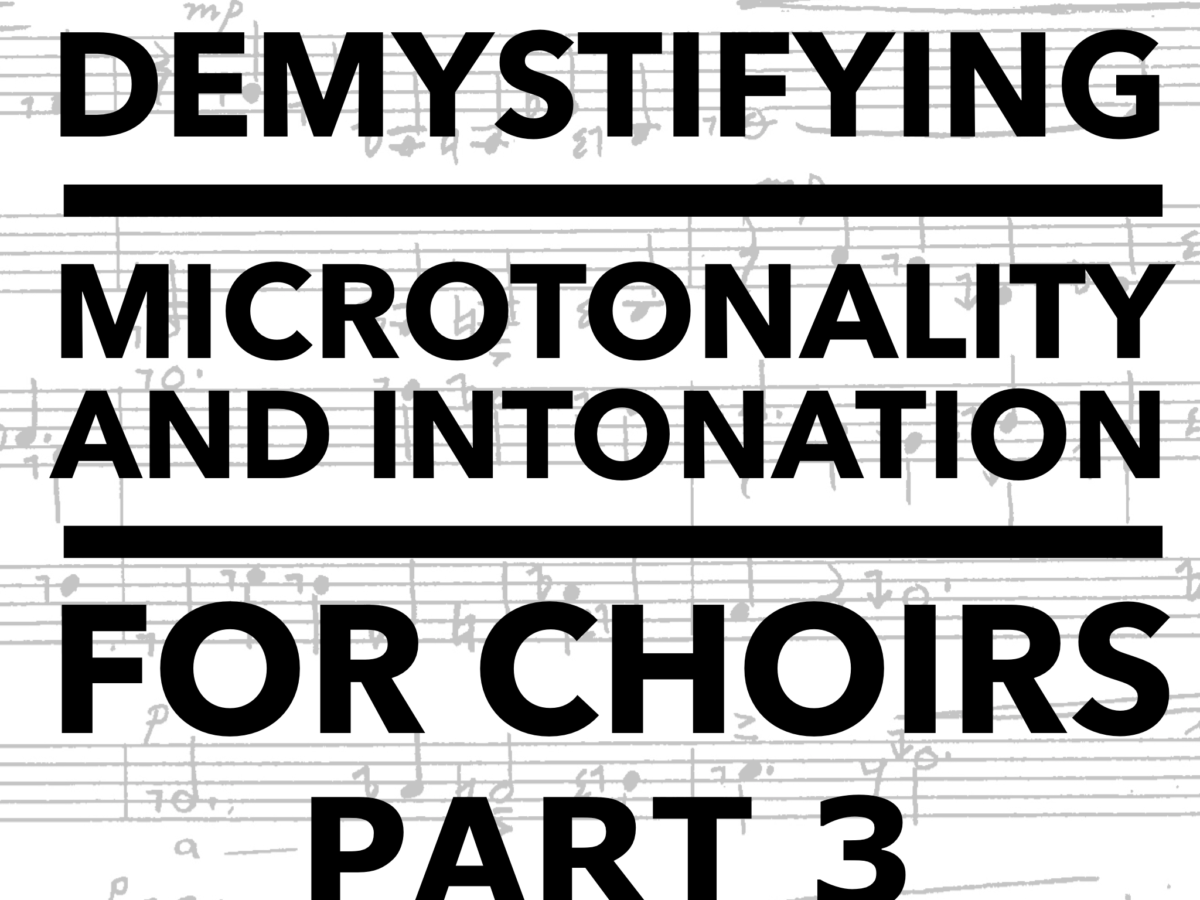 To make sure we’re all on the same page, here’s a list of terms I’ll be using in this series:‍

Part 3: Just Intonation Triads, i.e. but which minor triad should we sing?

This article will discuss what happens when we start creating harmonies derived from the overtone series (JI intervals) instead of relying on equal temperament. Here is a chart of the first 10 overtones with a fundamental of 25hz, which I am arbitrarily calling ‘C’ for ease of explanation and math.

This is the moment when microtonality becomes fascinating and starts to veer from our traditional music training. Because both of these minor thirds are still fairly low number ratios, they both sound consonant to the ear. So how do we choose which one to sing? Is one more ‘right’ than the other?

Let’s expand this idea beyond intervals and look at full chords that fall naturally in the overtone series using these two different types of minor thirds.

First, we’ll look at the triad starting on E. Here’s where those notes fall in the harmonic series:

Notice a couple of things: first, that the E we are using starts on the 10th harmonic, which is a decent way up the series. That’s because the ‘B’ in the series doesn’t show up until the 15th harmonic. Second, there is a lot of harmonics between the G and the B. That’s because as the series gets higher the notes get closer and closer together. Remember, the higher the numbers in the ratios, the less consonant the pitches.

This is the minor triad starting on G and where those notes fall in the harmonic series:

By contrast, this triad is made from lower notes in the overtone series and should be more consonant. The harmonic degrees are also closer together.

If you’re like me (and most everyone else in the western world) you grew up around ET tuning and the first will sound more normal to you. That’s because, though it is in JI intervals, it is much closer to an ET tuning than the second chord. The second chord might sound a little off, perhaps too smooth, flat, and colorless. That’s because it is, in fact, noticeably more consonant than the minor triad we are used to.

So, which is correct? The answer is neither. Or rather, both! It depends on what you are going for and the context of your tuning. Barbershop harmony, for instance, relies on the ear’s natural inclination towards consonance to create the ultra smoothness in its chords. The second chord might also be a better choice if you are dealing with a drone based music or tuning with natural harmonics from instruments, which are always in JI intervals. If, on the other hand, you want a brighter, more colorful sound, the first triad might be a better choice.

In general, this is how choral music has historically been performed and written. I’ll go into details in a later article but, in brief, early music is thought to use this principle of low ratio intervals to guide its tuning practice both performatively and compositionally. It guided early instrument building practices and is, perhaps unconsciously, used in a cappella performance still.

If you are an ardent piano devotee and regularly use it as a choral rehearsal tool, the next article offers some tools for how to get away from the ET of the piano and learn how to better hear and sing JI Intervals.If you’re like me (and most everyone else in the western world) you grew up around ET tuning and the first will sound more normal to you. That’s because, though it is in JI intervals, it is much closer to an ET tuning than the second chord. The second chord might sound a little off, perhaps too smooth, flat, and colorless. That’s because it is, in fact, noticeably more consonant than the minor triad we are used to. Stay tuned for the next set in the series which will cover pitches beyond the 12 note chromatic scale, examples from the literature, and exercises to practice singing these tunings!