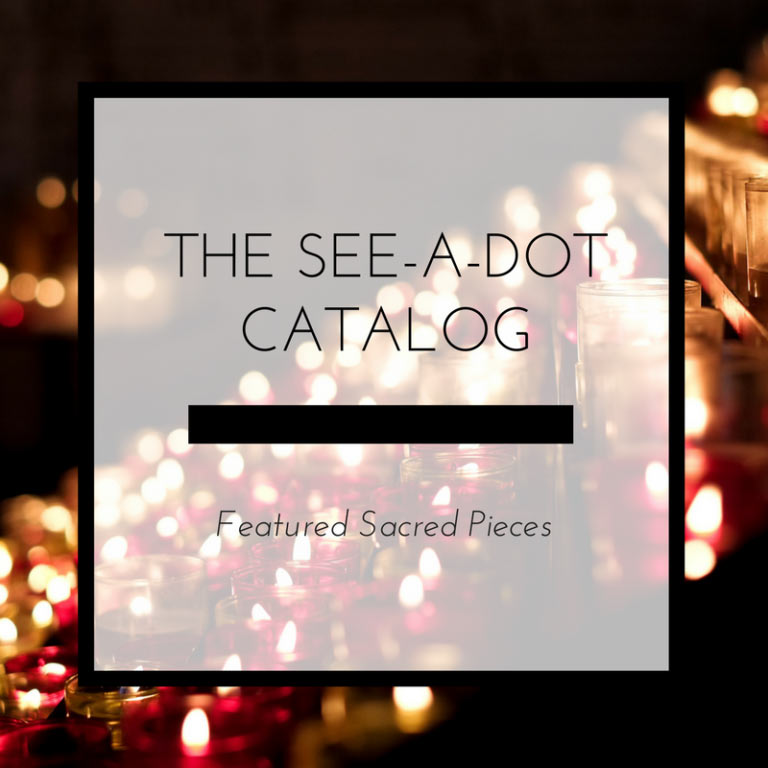 Religion and choir go together like peanut butter and jelly: the Western choral tradition has its roots in medieval Gregorian chant and mutated over time to include polyphony and form, usually after some ecclesiastical reckoning or change. In recent times, the choral tradition has also included numerous sacred practices and experiences, such as Judaism, Hinduism, Islam, Taoism, among others. See-A-Dot acknowledges this relationship between the ecstatic experience found in sacred practice and in group singing, and we have many pieces that are either influenced by sacred text or part of sacred worship. Take a look below at some of our favorites!

Another piece inspired by older sacred traditions, Jonathan David’s “Alleluia” starts with a hypnotic antiphonal plainchant and morphs into an epic anthem of the spirit. This is an excellent piece that requires choirs to start from something small and build to something momentous; it is a piece that is easy to perform well, but takes great skill to master. Definitely recommended for church choirs who want a powerful opening number for their services.

They That Wait Upon the Lord, by David Hurd

We’ve written a few times about “They That Wait Upon the Lord,” such as our blog post on pieces with great vocal solos, but David Hurd’s setting of Isaiah 40:31 is just that stunning. Hurd is known throughout the Episcopal community for his prodigal organ playing and his amazing sacred pieces, and “They That Wait Upon the Lord” is no different. Starting with a beautiful, staggered cluster chord, the piece features a solo soprano melody that perfectly embodies the patience and awe that comes from Isaiah 40:31: “But they that wait upon the Lord shall renew their strength; they shall mount up with wings as eagles; they shall run, and not be weary; and they shall walk, and not faint.”

The Seven Line Supplication to Guru Rinpoche is a traditional Tibetan prayer that invokes Padmasambhava, the Buddhist master that helped established Buddhism in Tibet in the 8th Century. Harry Einhorn’s setting of the Seven Line Supplication is equal parts sacred and fun, as hypnotic prayer lines are juxtaposed with jazz harmonies. There is a mixed choir and a men’s choir version of this piece available on our website.

Who is this Boy?, by Fahad Siadat

Fahad Siadat’s “Who is this Boy?” is a somber, serene piece that plays with a darker thought in ecclesiastic circles: did the witnesses of the Nativity know that Jesus was going to die young when he was born? The song serves as both a celebration and a requiem for the Messiah, which is reflected in the mournful, bittersweet tone in the music. Definitely a piece for Christmas-themed concerts that are more reflection-based.

Maskil of David, by Karen Siegel

A dramatic and thoughtful setting of Psalm 55, Karen Siegel’s “Maskil of David” frames David’s plea as a fraught, toiling soliloquy. “Maskil of David” utilizes haunting harmonies, overlapping melodic lines, and aleatoric sections to evoke David’s anger at his friend’s betrayal and his fear of death. This piece is successful in mining the dramatic from Psalm 55 and placing it in a context that any person could understand. This piece is challenging, but the result is worth it; it is recommended for chamber vocal ensembles, college groups, and professional groups.

If “Domine Jesu Christe” and “Alleluia” are our Medieval-inspired sacred pieces, John Cantrell’s “Ave Verum Corpus” would be our Renaissance-inspired sacred piece. “Ave Verum Corpus” utilizes exquisite vocal counterpoint, which is a phenomenal achievement considering this piece is written for double choir (8 parts!). Cantrell also uses the double choir arrangement to build up the piece: the treble and men’s choir trade off phrases until they come together for an overwhelming climax. This piece is recommended for choirs of all denominations and all sizes.

One of the more meditative pieces in the catalog, Ethan Gans-Morse “Kyrie” utilizes a unique method of notation to evoke the sound he wants: each part has a melodic line they repeat for a certain amount of times, and on the bottom of the score, there is a table that lets each part know when to come in. This notation style lends itself to minimalist, stark music, but Gans-Morse effuses the piece with a sense of urgency and grief. Highly recommended for all types of choral groups, especially those who want to delve into this type of notation.