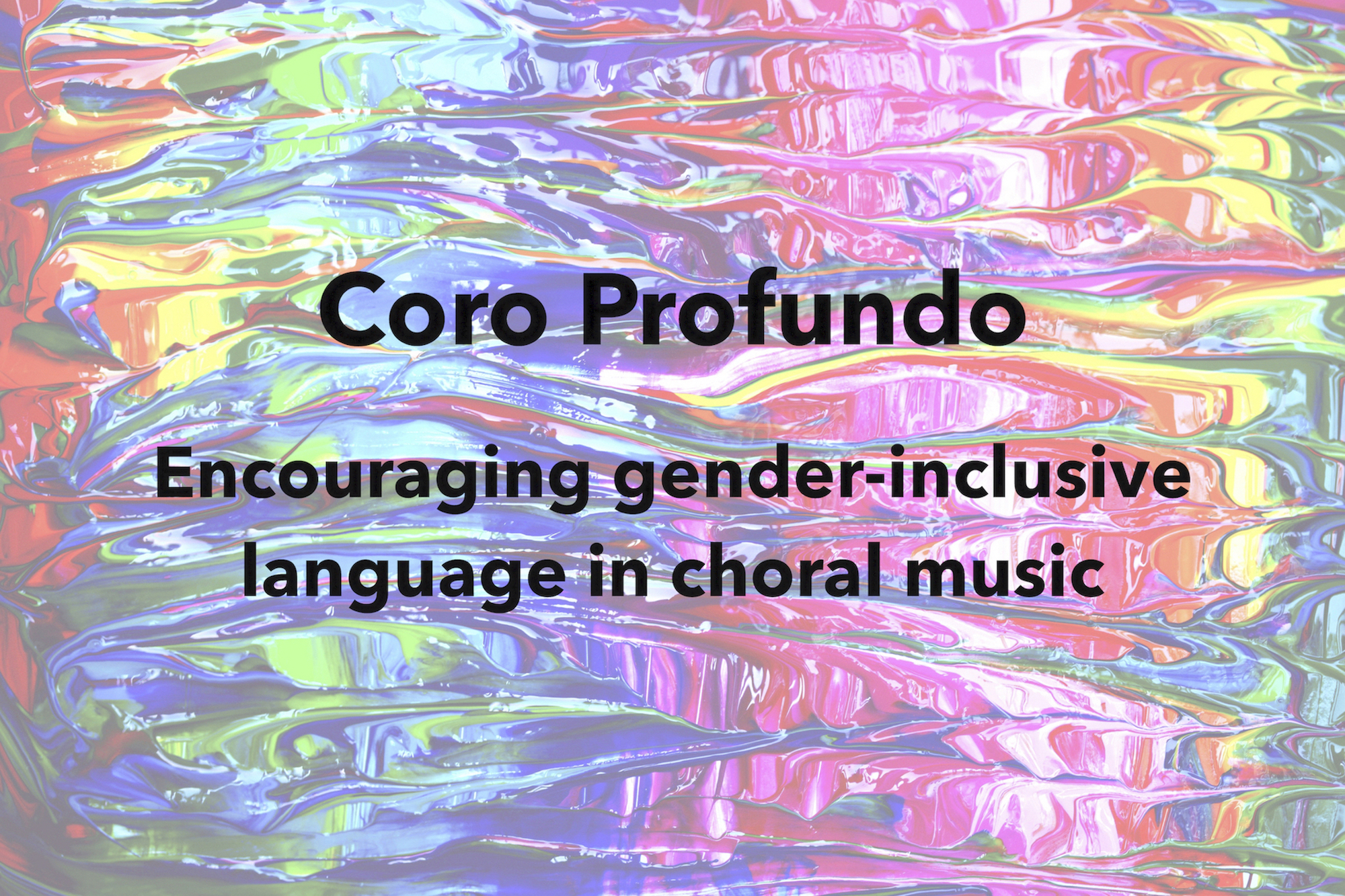 Choral singing is often about community first, and music second. Adjusting how we identify our singers and our choirs can open up the doors to singers who might have otherwise felt excluded from certain opportunities.

As of today, we are officially changing the designation of all pieces in the catalog that were tagged as ‘Men’s Choir’ to ‘Coro Profundo’, and if you are a composer that likes to write for Coro Profundo, or are a choral director or work at a school, I encourage you to change the designation of your low voice choir to the same. It is sometimes by the hand of individuals who make a small change that we set new norms and make a societal impact.

Here's how I came to make this change:

My senior year of high school I asked the choir director if I could join the treble choir. I was set to attend college at a music school the next year, and wanted to gear up by taking as many music classes as I could. I was already in our chamber choir and wind ensemble, and my free period happened to align with the treble choir rehearsals. I was a high tenor with a deep love of 80’s hair metal and Jesus Christ Superstar so singing alto didn’t seem too far of a stretch. Plus, I got to be the only guy in a room full of  girls. High school me was thrilled by the idea.

The experience was fun; I made some new friends and had a small featured solo, and I'm not above admitting I liked the novelty/rebelliousness of the situation and being the center of attention. The only part that struck me was how difficult it was to fit me into a situation that was so clearly based on gender. The entire choir, for instance, wore black dresses and tiaras in performance. No matter what, I was going to stick out like a sore thumb. The large plastic crown they gave me to wear certainly didn’t help.

I also became aware of how frequently gendered language is used in choral rehearsals. At first I found it amusing when the director would refer to us as “ladies” and then would look at me with a chuckle and add “...and gentleman”. But after the first few weeks of rehearsal it became tiresome.

That same year, I also joined my first community chorus (I REALLY wanted to get as much experience before college started as possible) and ran into a similar situation. Like nearly every community chorus I have worked with since, we had a female tenor. I, again, encountered similar verbal addendums. “Let’s start at mm. 34, just the men...and Martha.” I’ve seen this scene repeated a hundred times with male altos and female tenors. I’ve also worked in choirs with transgendered singers going through sex (and consequently voice part) changes, as well as non-binary folks who prefer not to have the cultural baggage of gender identity define who they are and how they should act.

Why do we insist on making gender identity and dynamics such a big part of choral culture? The more I see it occur in rehearsal the more it strikes me as both unnecessary and inaccurate. It would certainly never occur in other musical settings. Could you imagine an orchestral conductor referring to the brass section as ‘gentlemen,’ even if the players were all male?

In the last few years I’ve worked hard to notice my own tendency to use gendered language in the choral rehearsal and have slowly replaced such language with more accurate phrases like “low voices” or simply “basses and tenors”. The one place where I have continued to struggle is the name for tenor and bass choirs. For soprano and alto choirs we have the elegant and succinct moniker of Treble Choir, but no such equivalent is widely used for what is typically referred to as Men’s Choir. While the opposite of ‘Treble Choir’ is obviously ‘Bass Choir’ the term can easily be confused with a choir made up entirely of basses (which could be really cool...but is certainly a different thing). Other, more accurate designations like ‘TTBB Choir’ or ‘Tenor/Bass Choir’ are clunky and lack the simplicity and elegance of ‘Treble Choir’, and so the term Men’s Choir has persisted.

The term itself, and consequently the ensembles, is inherently exclusive. Perhaps that’s the point, and if your intention is to specifically have a choir of singers that identify as men, go right ahead and call it a men’s choir (and perhaps ask yourself why that is an integral part of the experience).

For the rest of us, I would like to suggest using the term ‘Coro Profundo’, Italian for ‘Deep Choir’. Not only does it sound cool, it accurately describes the timbral quality of the chorus without relying on equating voice parts with gender identity.

And if you haven’t had a chance to check it out, we have an excellent collection of pieces in the See-A-Dot Music Publishing catalog that are perfect for Coro Profundi of many levels.

Fahad Siadat is a composer-performer specializing in vocal music. He is the founder and director of See-A-Dot Music Publishing.