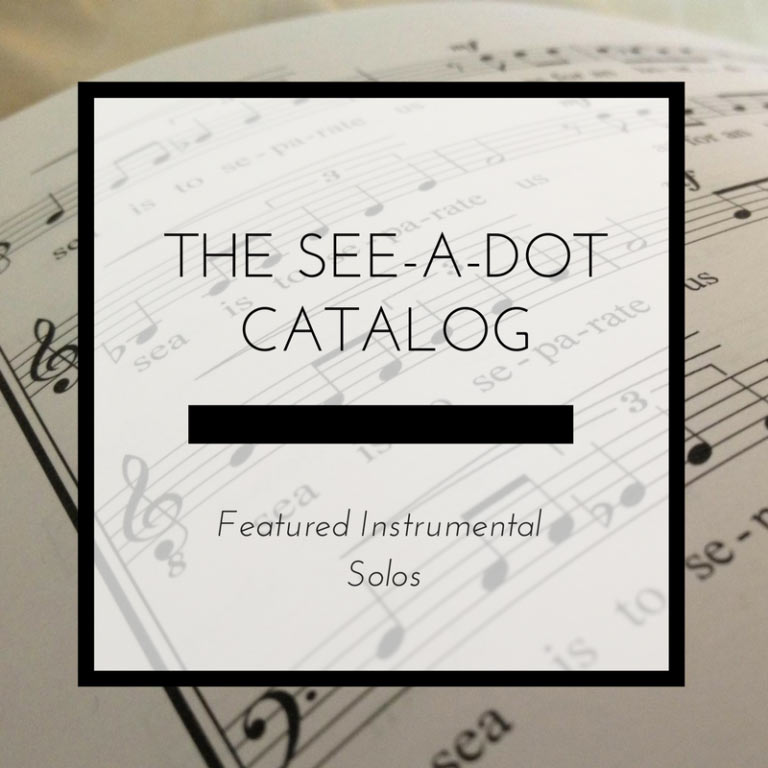 Our last blog post focused on pieces in our catalog with featured vocal solos, but we also carry a number of pieces featuring obligato instrumental parts as well. There are many examples in the standard repertoire of the interplay between instruments and voice, like Eric Whitacre’s Five Hebrew Love Songs, and Randall Thompson’s Tarantella. Such obligato additions allow choirs to collaborate with musicians within their communities and are a great way to create new relationships between instrumental and choral groups.

Below are some pieces in the See-A-Dot Catalog that feature instrumental solos.

Of All of Them: the first, the last

The cello solo in Drew Corey’s Of All of Them: The first, the last may seem like an auxiliary component of the piece, but it is actually a cornerstone of the piece’s melancholic atmosphere. The cello drones not only keep the tuning in tact, but act as an aether with which the vocal soloists can interact. The cello also shares in the expressivity and longing apparent in the vocal lines, adding a new dimension of timbre that works incredibly well with the timbres of the voices.

Poet of the Body and Soul

Generally, piano accompaniment is not necessarily seen as a piano solo in choral music, but the piano accompaniment in Andrea Clearfield’s Poet of the Body and the Soul takes on a character of its own. Throughout the piece, the piano solo has moments that allow the pianist to shine as well as moments where the pianist guides the choir to a new section of the piece; it takes a pianist of considerable skill to navigate the journey of Poet of the Body and the Soul, but the pay off is worth it.

Rachel Fogarty’s In Flanders Field is a piece about the casualties of war and the trauma surrounding the events of World War I, thus the flute and percussion solo play a very important part in providing context and atmosphere for maximum effect. While the flute exudes a peaceful and hopeful presence, the percussion very blatantly mimics the sounds of artillery and gunfire; both instruments serve as a juxtaposition between the longing for home and the reality of war in a foreign land.

Similar to Poet of the Body and the Soul, the piano accompaniment for Stephen Barr’s Sweet and Low could stand as its own piece during certain sections. The plaintive beginning section and many transitory sections offer a showcase for the piano accompanist, yet it’s the choral sections that allows the piano to mine all the sentiment and emotion as the piano sounds bell-like tones to support the melodic lines.

David Harris’ Sonnet has plenty of speaking solos for members of your choir, but there is also a killer instrumental part for either guitar, piano, or even harp. Thoughtful, expressive and relaxed, this solo line allows for some lovely cadenzas and some rhythmic variation, as it is mostly arpeggiations, especially if you decide to use a guitarist.

Money is Your Vuvuzela

Not necessarily an instrumental solo, but when was the last time you heard a vuvuzela used in a choir piece, let alone a musical piece in general? While it’s in the namesake, it’s still a pretty surprising moment in David Harris’ Money is your Vuvuzela when the audience hears a loud buzzing horn in the middle of a choir piece.

The Peace of Wild Things, from Appalachian Requiem

As one of the Contemporary Masterworks in the See-A-Dot Catalog, Michael Conley’s Appalachian Requiem contains many opportunities for instrumental solos. The most well-known solo opportunity from Appalachian Requiem, the oboe solo, occurs during its Agnus Dei section, The Peace of Wild Things. Beautiful in its simplicity and mournful in its execution, the oboe provides a more subdued color to the overall palette of the piece and reminds one of the fragility of nature and Appalachia as we know it.

Another Contemporary Masterwork, Andrea Clearfield’s Tse Go La: A Tibetan Cantata, also provides numerous opportunities for solos and interesting chamber arrangements. In the excerpt above, both the Bb Clarinet and the flute are center stage at different parts of the piece, accentuating the melodic line and choral harmonies with their own contrapuntal lines. The harp also gets a lot of love, as it plays ostinatos in the background, creating a meditative atmosphere through which the vocal soloists can play.