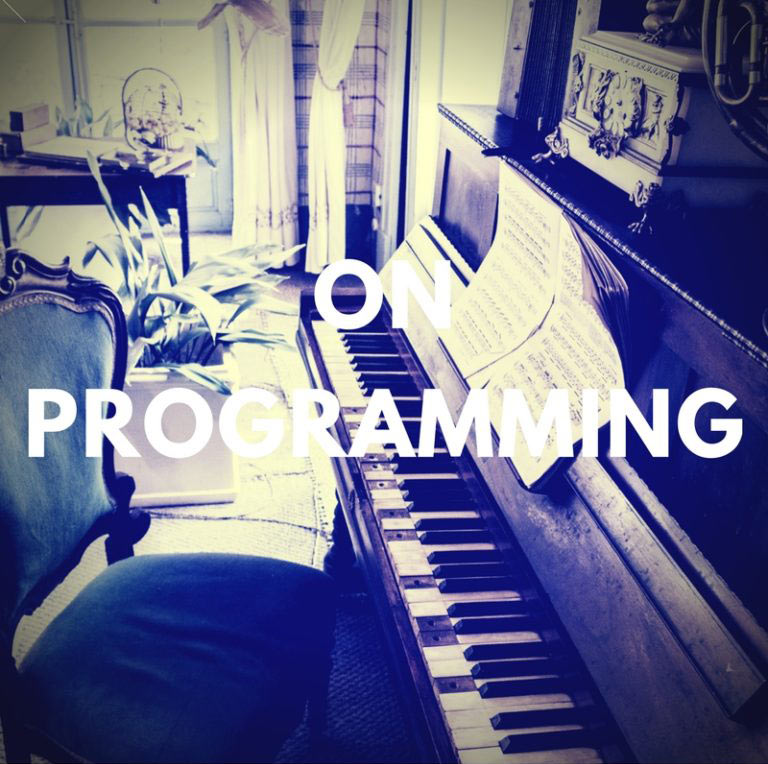 This is the final installment in a 3-part series, the first two of which can be found here and here. In these articles, we discussed some of the challenges presented by the task of assembling a program and worked our way through an example of the process. At the end of the last article, we left ourselves with a potential program that looks like this:

With possible inclusion of the following:

Two things immediately become apparent: this is a Latin-heavy program, and it features music exclusively from the Renaissance and the modern day. The latter fact can be a guide to programming the rest of concert, but we must decide whether the first is a feature or a bug. The direction I’ve chosen to go in is to buttress the inclusion of the Kverno with additional works in English, rather than to eliminate it, since single-language programs, while they can mitigate some challenges, can also get monotonous. Therefore, I cast about for additional a cappella English works from the Renaissance or modern day that satisfied the other constraints we have discussed, and decided to add the following:

We now have an intriguing range of pieces—consisting of an appropriate amount of material for a concert—that we can begin to order in a coherent way. Three groups begin to emerge from this list: dark, predominantly downtempo works of lamentation (the two Versa est settings, the Stabat Mater, and the Kverno), brighter, warmer, or more uptempo portrayals of joy or “release” (the Josquin, Palestrina, Messiaen, and Donner pieces), and works portraying a desire for closeness with God (the two Byrd pieces and the Cantrell). If we desire a programmatic progression that ultimately uplifts us, we might opt to order our program this way:

However, grouping similar pieces into these kinds of sets could present problems of engagement and stamina to both our choir and our listeners, so we might be better served by opting for a more sophisticated configuration, mixing in pieces of lamentation with pieces of yearning or joy to create the mid-level structures we discussed in the first article in this series.

How might a set that does this take shape? Since we have eliminated several moving parts in restricting our music selection to sacred a cappella works in English and Latin, we are left with a manageable number of crucial parameters to consider, chief among them key relationships, length of individual pieces, and tempo variations. As we continue this process, it will behoove us to attempt to break up slow music with fast, minor keys with major ones, and pieces requiring long periods of difficult or constant singing with “palette cleansers” in order to avoid taxing our singers’ voices and our audience’s ears – ideally, all the while, avoiding big harmonic shifts that may result in tuning problems for the choir.

Let’s begin by taking a set that makes sense together and listing the parameters of each:

When we list these parameters, several salient details jump off the page. One is that the keys of these pieces occupy spaces somewhat close to each other. Another is that this music is predominantly slow, so we should take care to arrange it in a way that presents the greatest amount of tempo variety possible. Finally, the presence of the two Byrd motets makes for the intriguing possibility of pairing them with each other. Given these considerations, there is one ordering that emerges that seems particularly sensible:

This order allows us to begin with a dark, poetic portrayal of the suffering of Christ before responding to it with a motet of lamentation in the same key (transposing the Twist a half-step down mitigates some of the registration challenges it presents, and the piece works well enough in that key to justify our doing this), in the process progressing from slow to fast to slow again. The tone then shifts to yearning, and, finally, peace with the two Byrd motets. This ordering also leaves us with the possibility of performing both these pieces in Ab minor—perfectly defensible given what we know about the non-standardization of pitch and performance practice in the Renaissance—which mitigates a possibly jarring key change from the first half of the set to the second.

With this set in hand, we can build our other sets accordingly and order them in a way that communicates the overarching narrative we have in mind. After doing so, I eventually settled on this program:

This program is coherent, provides a satisfactory listening experience for the audience, and can be executed at a high level. Its first set opens with an eminently singable piece to settle the choir at its outset before launching into its most endurance-testing work while the ensemble is still fresh, and pairs works that discuss the Virgin Mary in a chronological narrative structure (she is born and her virtues are enumerated before she is discussed in the context of the Crucifixion). The dark mood of the David gives way to a set that responds in several ways to the first one, mirroring its contents (one modern and one Renaissance motet in Latin that pick up thematically on the content of the first). After that comes the first set we assembled–which contains its own narrative structure–which gives way to our closing set – three motets of joy and release, which represent a satisfying conclusion to the journey that began in contemplation and sorrow. This structure has the added virtue of symmetry – it is bookended by two works that mirror each other in many ways: Renaissance motets in Latin discussing the virtues and joys of the Virgin, the latter of which touches on many of the themes and qualities we explored in the middle of the program.

The problem of programming is a complex one that requires a great deal of creative thought, but it is ultimately one of the most satisfying tasks a director can undertake. Piecing together works is like putting together a jigsaw puzzle – there are always multiple angles to consider at any one time, but when the right combination of pieces presents itself, the effect can be magical. With practice, thought, and enough knowledge of repertoire, the savvy director can come up with a seemingly limitless number of combinations that can take both audience and choir on a journey of any nature and character. This is the reward, and the challenge, of successful programming.