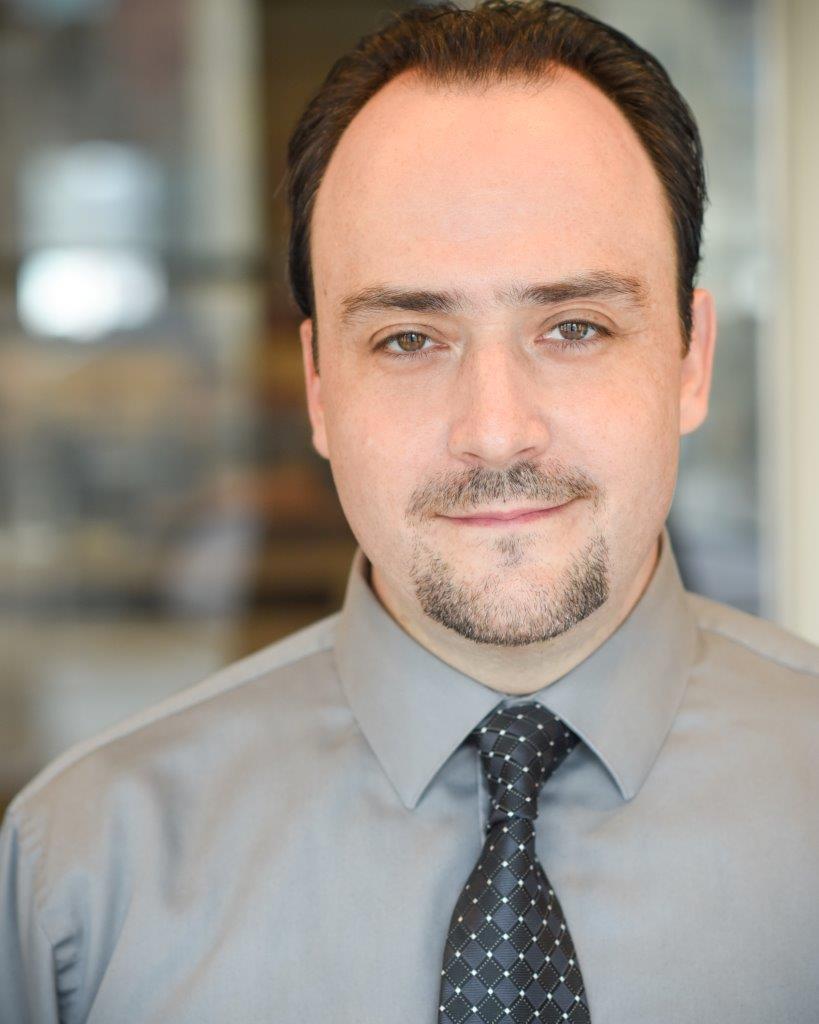 A performer who is comfortable with many genres, John Edward Cantrell, is considered one of the most versatile church musicians in New York City and is referred to as a “musician’s musician” by his colleagues. In addition to his pieces, we'd like to learn more about his processes and inspiration for "Appalachian Nunc Dimittis" and "Adam Lay Y Bounden."

Anya Lagman: Hi John, my name is Anya Lagman and I am the Publishing Associate with See-A-Dot Music Publishing. Outside of my role within the company, I am a composer and instrumentalist. As a composer myself, I would like to thank you for your time in answering these questions. I look forward to learning more about your career and background as a musician and composer. When did you start composing?  How did your musical journey begin?

JC: One night, when I was around the age of 6, by rare chance my mother let me stay up late to watch Saturday Night Live (parents, begin your judgement now).  In one particular skit, John Belushi was seated behind a piano dressed as Beethoven and pretending to play something classical.  Once the other characters left him unattended, he began rocking out playing something by Ray Charles.  In that moment, I jumped up on my mom’s bed and screamed “THAT’S WHAT I WANT TO DO!!!”  Thus, music lessons began and I’ve yet to reach the bottom of the rabbit hole.

I can remember dabbling with composing as early as middle school.  I was fortunate to have some really great music educators in my life who were always giving me recordings to check out.  Plus, my father, even though he was not a musician, had a diverse collection of vinyl records.  So, for as long as I can remember, music was always in the background and the foreground of my life, and the range of material that I was listening to canvased anything from bluegrass to Bach, Beethoven to Be-Bop, Stravinsky to Shankar, and a host of other composers and genres of music.  So, I suspect like most composers, it began with just listening.  All through high school, I was busy with numerous ensembles – Symphonic Band, Choral Ensembles, Percussion Ensemble, and Jazz Band.  I wanted to experience as much as I could.  My music degrees were in organ performance, but I did study film scoring with John LaBarbera at the University of Louisville and I had composition lessons with Joan Panetti at Yale University during my masters.

AL: What drew you to choral music?

JC: I’ve spent most of my life working for religious institutions, and choral music above all other forms has been a constant.  Whether you are a religious person or not, there is something to be said for the kind of unity consciousness that takes place among a group of people whose sole focus is bringing to life a piece of music.  I suppose you can say this about any type of music that involves a group, but I think for singers there is a deeper challenge in getting people with different dialects to match vowels and create well-blended sounds.  It’s a different skill set than tuning two instruments.

I wouldn’t profess to be drawn exclusively to choral music as a composer, but it’s often the case in my work that necessity is the mother of invention.  As a choral director, I’m fortunate to have professional singers that work for me.  So, it’s especially gratifying to have a built-in testing ground for my writing.  Not only am I able to receive pedagogical feedback about a composition, but it’s thrilling as a composer to see my creations come to life, and to experience firsthand the professional performers’ emotional reaction.  Ultimately, as I age, I’m all too aware of how solo performances as an organist can be incredibly lonely.  It’s infinitely more fun and more gratifying to the soul to make music with other people.

AL: Who are your musical influences?

JC: I think I’ve been as heavily influenced by genres as much as individuals.  If I look collectively at my works, I can see the structure of 16th centurypolyphony in some pieces, the wildness of Roots music in others, and perhaps above all, the influence of jazz harmony.  I suppose if I had to narrow down a few select composers, at the top of the list would be Palestrina, Pat Matheny, Stravinsky, and James MacMillan.  Though, like anyone who spends a lifetime critically listening, one’s musical influences shift.  I’d be remiss if I left out all the hours I spent listening to progressive rock in my youth…well, ok…through college…fine…yes, I still listen to progressive rock.  As of late, I’ve really been enjoying the choral music of Judith Weir and Cecilia McDowall.  Ask me again next Tuesday.  I’m sure my answer will be different.

JC: I wish that I could say that I was disciplined to compose every day.  That simply isn’t my reality.  The muse strikes when it chooses.  When it does, it tends to be like a hammer to the head and it would seem that my life gets put on pause until the composition is unraveled.  It’s a bit surreal in that I don’t agonize over composition.  Rather, when the seed of an idea presents itself, fairly quickly, a structure starts forming.

This is my process with choral music:

1.      Reading through the lyrics a few times almost always gives me solid ideas for the architecture of the piece.  I sketch out what the macro image of the score looks like on a piece of paper.  This means I will write down the lyrics, and then make verbal notes around the texts regarding texture, gravity of sound, colors of sound, instrumentation, etc.  If my initial seed of inspiration is a melodic theme, I write it at the top of the paper.  I usually can see within a lyric where the natural rise and fall of emotional content is clear, and even on occasion think about what is the golden mean of the piece.

2.      I read the texts again, and then keeping the melodic idea always in the back of my mind, I chart out the harmonic content.  Sometimes, what happens is that the lyrics in the middle of a verse might cry out a specific harmony before the initial lyrics.  I really do just let the creative process go where it needs to, rather than force a beginning to end process.  I’m also a jazz musician, so how harmony shifts is infinitely fascinating to me.

3.      Once I have a solid idea of harmonic content, I sketch out abstract lines suggesting a voice range, melodic direction, possible counterpoint, groups of voices, etc.

4.      Reading the lyrics again, and looking at what I’ve sketched, I begin committing to actual melodic content, all within the confines of the already established harmony.

This will probably sound strange, but when the piece is finished, there is a feeling as though it’s always been there.  Once the muse brought it to my attention, I just had to go through a type of musical archaeology to discern what it is, working from macro to micro.

‍
AL: How did you decide to set the texts for Adam Lay Y Bounden and Appalachian Nunc Dimittis?

‍JC: As a choral director, I find that the contemplative approach commonly applied to Adam lay Y Bounden falls short of capturing what is, to me, an overarching sense of astonishment and wonder.

The lyrics have a playfulness about them, like words from an animated storyteller capturing the attention of children.  So, in that childlike spirit, I began playing with the words, saying them out loud: sometimes reciting them as a recitative; sometimes overindulging the stressed syllables; sometimes fragmenting the lines for the sake of creating new rhythms.  With little effort, the naturally stressed syllables formed their own rhythms, often with strong syncopation.  That was the genesis of this composition - a playful bit of musical storytelling about a sacred mystery, a children’s game of sorts, brought to life through syncopation and jazz-inspired harmonic language.  This piece was ultimately realized by watching my daughters play at the Happy Warrior playground at 99th and Amsterdam in New York City.

Regarding the Appalachian Nunc Dimittis, my family is from the Appalachian foothills of Eastern Kentucky.  Having spent many of my formative years there, I was exposed to numerous forms of Roots music – the “High Lonesome” sound of bluegrass, shape-note singing, even lined-out hymnody akin to Scottish Gaelic Psalm singing.  The sonic quality of the singing was very powerful and earthen.  Singers would bend pitches at specific moments so that the intervallic purity of 4ths and 5ths would lock into place, resulting in marvelous overtones.  This type of sensitivity to pure intervals and the bending of pitch was deeply woven into the fabric of the Appalachian peoples by the folk music of the African-Americans and the Scots/Irish immigrants.  There wasn’t any concept of vocal pedagogy.  People would just sing their hearts out, and all too often, it was singing for deliverance from the trials and tribulations of a very difficult life.

I wanted to capture the essence of that earthen style of singing, and what lyrics could be better about giving your servant rest than the Nunc Dimittis, also known as the song of Simeon – “Lord, now let your servant depart in peace, for mine eyes have seen thy salvation…”  Harmonically speaking, this composition is not adventurous like my other works.  Rather, music in Appalachia was rooted in I, IV, V, and flat VII, so that’s where I kept it.  But, the opportunity to sing your heart out and slowly lock in those pure harmonies is immensely soul stirring for both singer and listener.

I wrote this piece in memory of my father - a salt of the earth Appalachian man who sacrificed everything for a kid who wanted music lessons.

"Appalachian Nunc Dimittis" and "Adam Lay Y Bounden" are available for purchase at seeadot.com. Interested in learning more about John? Find out more by visiting his website https://www.johncantrellmusic.com/composer.html for a list of his full works and upcoming performances.